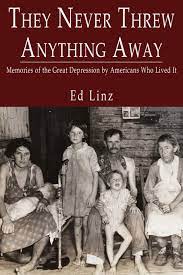 In the late 1990’s, author Ed Linz realized that he had not listened to family stories about the Great Depression, and he decided to interview Americans to learn lessons from their lives before, during, and after this tumultous period. Interviews include the memories of a Black man who worked in the turpentine forests of southern Georgia, the daughter of Greek immigrants who found herself at age nine in a tuberculosis sanitarium in Los Angeles, a Seattle barnstorming aviator; Mennonite farm families in northern Indiana; young women who worked by themselves as teachers in one-room schoolhouses in the Dust Bowl of the Midwest; a group of nursing students from the coal mining regions of Kentucky - and many other captivating memories of life during the Great Depression.

Ed Linz grew up on a small farm in Kentucky and graduated from the U.S. Naval Academy in 1965. He served as an Commanding Officer, USS KAMEHAMEHA (SSBN642), a nuclear-powered ballistic missile submarine. Later, he taught Physics and coached cross country in public schools in Virginia for over 25 years. His education includes Master's degrees from Christ Church College, Oxford University in Economics, and George Mason University in Secondary Education. Ed continues to teach Physics to home-schooled students in Virginia and lectures on the intersection of science and special education.

This program is appropriate for ages 18 and above. This is an in-person event. Masks are required. Register by clicking on the "Begin Registration" button (below).

This presentation is brought to you in collaboration with the Burke Historical Society.